How to bet on Ice Hockey

Ice Hockey is a sport that is growing in popularity. Not only in places where it is already at the rank of a national sport (blame Canada for this one) but in America and other parts of the globe also. Ice Hockey is a very strategic and violent game, often the teams clash in disputes that are involving fists but not words and the interesting part is that this is permitted somehow. For those who don’t know, Ice Hockey involves an ice skating ring, two gates and a puck. The puck is being passed around the ring, on the surface of the ice at a very rapid pace between teammates with the common goal of scoring in the opposite team’s gate. The puck is driven across the ice with the help of a stick and it’s the only way the teams are allowed to interact with the puck. Ok, but what’s the history of this game and where it all started? Then will take it to the next subject in matter: How to bet on Ice Hockey. 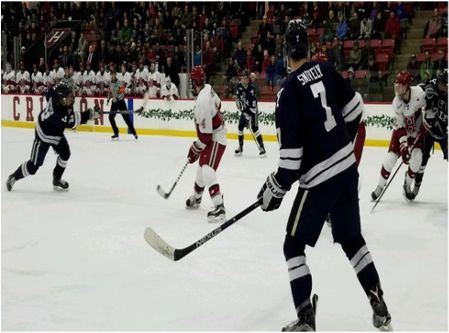 The history of Ice Hockey

The exact origin of the game is not known for sure. Games that involve a stick as a main way of interaction with the object that it is known as a ball or puck date back from pre-Christian times. In Europe there were many variations of games that involve a stick, every one of them had at large a different set of rules and a different gameplay. Back in the 1700s in England we see the first sights of games that involved a stick and a plug of cork used in wine barrels that were passed around as a form of entertainment. Later on after the British soldiers emigrated to United States and Canada, they brought their stick and ball games with them.

On 1800s the game of Hockey started to surface and it was mentioned by John Franklin. He said that the game of Hockey was the sport played on ice in the mornings. In the early 1900s an incipient version of modern Ice Hockey was played and it held the name of Shinney. It was very popular in regions like St. Lawrence River at Montreal and Quebec City and even in this day Shinney is an educative/informal type of Hockey for ice or even street hockey. Even though the game has mixed origins and it isn’t know for certain where it all started, Canada was the place where the game grew in popularity among the youngsters.

The first official game took place in the city of Montreal in the year 1875 on March 3, from then, it’s all history. Even when the game was in its early phase, there was sometimes betting involved, but it wasn’t a regulated form of betting.After the 1950 more and more betting shops started to appear, betting on Hockey matches become a well known option. At least in the regions where the sport has traction, like Canada or America. After the 1990 another big evolution for the betting community started to pick up popularity. It was a network of computers communicating with each other at distances of thousands of miles. The internet was born. Even though at first many betting websites didn’t had Ice Hockey as an option, with time it started to become a most for the grand majority of the betting websites. After the informative part of the article, this leads us nicely to the next and the most important section.

How to bet on Ice Hockey

The first thing i want to point out to you is the fact that this tutorial on how to bet on Ice Hockey applies to offline and online betting so you are all set. The main difference between offline and online betting is the comfort really. On online betting platform you can place a bet from basically everywhere, you just need an internet connection and a device to login into your account. But in the case of offline betting (betting to a brick and mortar betting shop) you need to be present in the shop in order to fill up the betting slip. For the purpose of this article will take as an example online betting, being that is the most popular form of betting in the world.

1. Get started with online betting

Before we start to get in the technical part of betting, first you need to find a betting platform that it’s available in your region and it had a decent number of payment methods available. To create an account, login then navigate to the Sports section.

2. Next to the matches you will see some numbers and above the numbers there is a 1, a X and a 2. Odds and betting types

The 1 represents a win for the home team, the x means that it will be a draw and the 2 means that the second team will win. The numbers that we talked about earlier are the odds. If you are completely new to the betting scene i will explain to you the odds also. An odd is a number that represents the chance for a set team to have the chosen result. In the case of decimal odds (Europe odd system) if the number is closer to 1, then the team last a very high chance of winning, if the number is greater than 1, then the team has a lower chance of winning. Below are the most common betting types:

Well betting is a game of probability and a little bit of luck. First you need to study the two teams and see if they had past confrontation. In most betting websites you will see a status icon next to the match. When you click on it the past matches that the teams had, will be displayed and also some relevant stats. If those are not enough, then consult the good old friend Google.

Then after you made up your mind regarding the bet, select an odd. In an instant it will appear in the betting slip. Here you place a steak on the bet or select some advanced options like Singles or Doubles (will cover them in a future article). After imputing the stake, the potential win will appear in the bottom of the slip. The win is calculated as following: you steak X the odd (in the case of decimal betting). When you are ready you place the bet and the slip will appear in your account. If you win a match or the entire slip, a notification will popup to let you know.

And believe it or not, that’s about it. You must know that the first bets won’t be that great and most likely you will lose some money. But my advice is to bet small sums of money so it will not be that dramatic. Also place be patient and don’t bet if you get nervous.